Using an iMac as a secondary monitor. Welcome to Mac Mondays! We'll talk performance upgrades for old and new models , hardware hacks, and workflow tips. This is where you'll go to find out how to release your Mac's potential and make the most of your purchase. Last week Matt Elliot covered how to organize your Mac's desktop using Spaces.

Spaces offers a virtual method of adding more desktops without multiple monitors. While Spaces is a productivity haven for Mac users, sometimes using an extra monitor is the only way to get things done.

Use external monitors with your Mac

I've been using a secondary monitor for nearly two years now, and I couldn't imagine a better setup for what I need. Connecting a second or third display to a Mac is something you can do with very little tech-savviness, and only a little time to actually set it up save for the time it takes you to actually pick out a monitor. It's important to note, some Mac's are limited to powering only one external monitor the MacBook Air, for example , while others can support two or more. The easiest way to find out how many monitors your can connect to your Mac is to visit the Apple Specifications page for your respective Mac.

Visit this page , find and select your Mac, then look under Graphics and Video support for number of external monitors supported. When you shop for a monitor, pay attention to the type of connector that comes bundled with the monitor.

As Geoffrey Morrison explained here , if it's at all possible, avoid VGA as it doesn't offer pixel-perfect image quality. Since Apple abandoned both connection types long ago, you'll need to purchase the corresponding Mini DisplayPort adapter i. The adapter converts the signal coming from the monitor, making it compatible with your Mac. Don't sweat if you own a newer Mac with a Thunderbolt port -- it doubles as a Mini DisplayPort as well.

Big thanks from me. My set up is just wot I wanted! Wish I had seen this earlier but this helped me a lot! I have the right cable, but when I connect the two, my new laptop is the controlling system. How can I change it? But how to stop mac from automatically changing primary monitor?

And then I have to manually change it back. Wow, Thank you. I have been a Windows user since Last summer , my 4th Sony Laptop which I paid over dollars for would not power on one morning. This was my 3rd Sony laptop that died before its time. I am a iPhone user and iPad user and have been very happy with them so I decided to make the plunge to a Mac. I installed a gb SSD and maxed out the memory at 16gb. I am so pleased with this small but powerful computer but I still have problems with finding things like this issue of selecting the primary display.

In Windows in the display settings it is one of the options to check on each display page. Its taken me a while. But then again I was so used to windows. I hope someone like you could make a single page with links comparing how windows did things like this and what Apple does. I wish Apple context windows had more options.

That is one of the Windows benefits, where ever you are pretty much right click and all the options you would like are there. Also, if there are other things you would like to do, for example one standard context option should I say is not standard is right click save to folder or copy to folder.

But if you google you desires some one has already made up a program you download for free. It makes th registry changes for you and your done. One of the benefits are all the free and low cost apps that after all this time Microsoft is finally doing the same. Anyway, Thanks again. That was so awesome when I did it. For some reason I cannot get my display to fill my entire screen. Stephen Elliot: Did you find a solution to this? Moreover it is a common error that speakers use slides as note for themselves and reading them loudly. Presenter View helps to solve this issue by showing notes, elapsed time on the speakers monitors, and the next slides.

In order to access this functionality, mirroring has to be turned off in display settings, and extended display option has to be chosen. Is there a way to do that? I tried booting with just the second monitor plugged in and it did show up on the second monitor, but once again when I have both plugged in, the boot screen reverts to the first monitor. I am running Mac Pro with lion and 2 screens, each plugged into separate video card. A workaround for me is — if the logon screen shows up in the wrong place, do a restart from the logon screen. 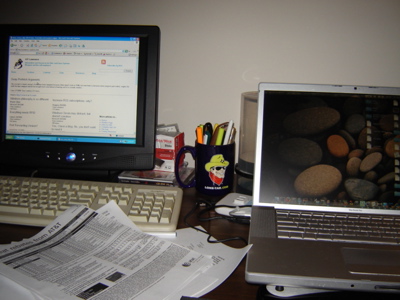 
Thank you for this. I should have guessed it would be this simple. Your next step is to set as the primary display to the external display, so that the menubar will appear on the external display and not on the […]. I looked a while and finally found! Name required. To change things, head to System Preferences , then Displays. If Mirror Displays is checked, uncheck it. You can also pick a default monitor by moving the white bar at the top of the blue boxes.

The default monitor is where notifications are shown. Mission Control puts this all into one place, along with the new Full-Screen feature. This is all well and good, but it gets a bit more complicated for users of multiple monitors. For example: if you set up multiple monitors, then set an app to work in Full-Screen mode, you might notice one of your monitors going blank.

If this happens to you, head to Mission Control in System Preferences and make sure Displays have separate spaces is checked. This will allow you to use a full-screen app on one monitor while another works as a regular desktop. It also lets you switch virtual desktops on one monitor without switching on the other. If you want to move an application from one display to another, you need to use the mouse.